A Tribute to Carroll Shelby

I spent the day yesterday on the radio, as well as putting a show together for Sunday to pay tribute to a great American Icon, Carroll Shelby.  I had the honor and privilege to meet Carroll Shelby in 2000, at the SAAC event in Lime Rock, CT.  My family has been involved in racing since 1904, and my love of Mustangs and high performance Fords has put me on the best race tracks in the country.  Along the way, I met some great folks, including Carroll Shelby.  He can be credited with turning Baby Boomers into muscle car enthusiast.  He put the world on notice in 1965 that an American company was dominating world racing, beating the majestic Ferrari.  His legend continued with great cars like the GT350 and GT500 Mustang's.  His icon will always be the Cobra.  In the more recent past, I tried to convince the Shelby group to get some great organic coffee in the  product offerings for the Shelby Signature Foods.  A program Carroll wanted to have to raise money for his foundation that supports children, education, and legacy of his name.  I have spent many weekends on the track with some of the original Team Shelby drivers, as well as all those great folks who have preserved the great cars of the 1960's.  I went to many of the SEMA shows to see and talk with Carroll Shelby about the new design mustangs, and even while in his late 80's he always had his head in something faster.  Baby Boomers all recognize that they had some of the greatest cars in the 1960's and a lot of that go-power came from the great Carroll Shelby.  Yesterday, Rick Jensen and I spent an hour in the afternoon talking about great history, great cars, and took some listeners calls about old Fords, and about a great man, Carroll Shelby. 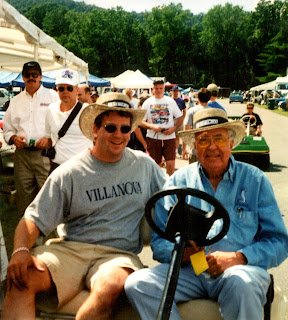 Who else could give you some driving pointers?  Thanks Carroll

Posted by Retire Smart with B Michael Shanley at 11:50 AM